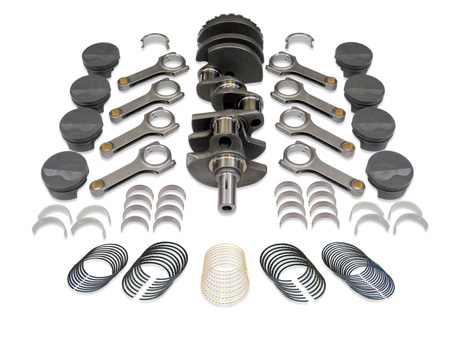 Modifying the LS for more power is as easy as falling off a log, to a point, then some tough issues arise, especially if you are building a high-rpm race engine. But until you reach that point, the LS responds nicely to boring and stroking, improved cylinder head flow and they respond especially well to power adders.

The only real chink in the LS armor is that GM’s cylinder head designers didn’t leave any room for a proper high-lift, high rpm valvetrain. It’s essentially the same problem the Gen III Hemi’s have − no room under the valvecover. The stubby LS rocker is just about standing on end at lifts above .650?, and there’s not enough real estate to install a longer pivot length rocker and shaft assembly that provides good rocker geometry. Some companies like Mast Motorsports are taking matters into their own hands and designing heads like its Mozez that has a larger rocker area and uses an SB2 small-block valvecover.

But that’s okay, especially if you decide to build for torque instead of rpm. The LS engine readily responds to stroker crankshafts with corresponding cylinder heads capable of feeding the increased displacement. The LS has always been thought of as a replacement for the small-block because of the similar 5.7L displacement, but in reality, the engine responds more like a big-block. You rarely hear of anyone with a truck complaining that they want their old 454 back in place of their new 6.0L LS, because he 6.0L tows almost as well with a lot better fuel mileage.

Speaking of displacement, GM has built several production versions of the LS ranging from a 4.8L truck engine to the 7.0L Z06 Corvette rated at 505 naturally aspirated horsepower. They did this with two generations of engine blocks Gen III ’97-’05 and Gen IV ’05-’11), available in both aluminum and iron. GM even produced a front wheel drive version, the LS4 that has a unique bellhousing bolt pattern, so be aware of that one when scrounging the salvage yards for cores. Gen III engines were built with three different bore sizes 96.01mm (4.8L and 5.3L truck blocks), 99mm (LS1, LS2, LS6) and 101.6mm (6.0L truck blocks). Gen III stock stroke cranks were 83mm (4.8L truck) and 92mm for both LS1-LS6 and 6.0L truck engines. The LS series of engines uses a cam position sensor that provides the ECU with timing information. Part of this system is a reluctor wheel attached to the crankshaft. It is important to take note of the reluctor wheel tooth count as most Gen III engines (up to 9/05) used 24-tooth reluctor wheels and 58X-tooth reluctors for the Gen IV engines. There’s actually much more involved than tooth count because the reluctor wheel is ECU specific. How and where the cam position sensor is mounted, and with which type sensor 1X, 2X or 4X, adds to the confusion. If your customer is converting to drive-by-wire, it adds another layer of complexity. We don’t have room to completely cover this subject, but there is lot of information available on the LS forums like LS1Tech, LS2.com and others. Just understand that this is a critical consideration with any LS engine build.

In 2005 Gen IV engines were introduced with now recognizable performance icons like the LS3, L98 and the awesome LS7. A couple of things that could trip up the average engine shop is that some of these engines came from the factory with variable valve timing (VVT) and/or active fuel management. So do your research when building a stroker engine for a customer and make sure you know what you are dealing with. Gen IV blocks came in four sizes 96mm (4.8L and 5.3L truck), 101.6mm (LS2, LS98 and 6.0L trucks), 103.1mm (LS3, L92 and L99) and 104.8mm for the LS7. Stroke selection remained the same as the Gen III with 83mm and 92mm, plus the addition of a 101.6mm stroke for the LS7.

Another LS block from GM worth mentioning is the aftermarket LSX iron block with a raised cam and deck height that accepts bores and strokes to 108mm x 114.3mm (4.25? x 4.5?). These blocks are capable of handling 2,500 hp with the proper rotating assembly, cylinder heads and power adder.

So with a better understanding of the different LS engines produced by the factory, let’s take a look at stroking them for more performance. We contacted Horace Mast of Mast Motorsports for some advice as his company is dedicated solely to engineering and supplying complete LS engines to the aftermarket. His best advice is limiting the stroke to 101.6mm (4.00?) in any standard deck height LS block. (Horace says that most of his engines end up with a 9.230? deck height after surfacing.) This will provide up to 416 cid for an LS3 and 427 cid in an LS7. He has built LS3 and LS7s with 4.100? stroke cranks, but says that the have poor long-term durability, and he doesn’t recommend them, especially for daily driven street cars.

The problem with strokes in excess of 4.00? in a LS motor is that the piston skirt is not properly supported at the bottom of its travel, causing a lot of rocking and premature wear. In fact, Mast’s 4.00? stroke engines use specially designed Mahle pistons to minimize this problem and to provide a more stable ring package. Horace maintains that the same holds true when using the taller deck LSX block – Mast limits displacement to 454 cid even though 511 cid is possible. Even then Mast warns its customers about using these engines as daily drivers because there are too many compromises in the area of piston stability.

Other companies like Flatlander Racing who sell K1 stroker kits for LS engines agree with Mast on the 4.00? stroke for normal deck height motors, but are more aggressive on the LS7 putting the limit at 4.120? stroke and 4.250? for the LSX blocks.
Another issue with LS engines is making sure that your bore size is compatible with the cylinder head you will be using. Most companies selling stroker kits do a good job at listing what heads will work with which kits. However, if you are unsure, take a little time to research what combination will work for you. It’s just one of those quirky LS things that you didn’t have to worry about with traditional 23-degree Chevys.

So let’s look at what’s available in LS stroker kits from some of the aftermarket’s top vendors. Prices vary widely from top shelf U.S. made components to lower priced imported components. Another contributor to price is the completeness of the rotating assembly, and whether it comes balanced or not. You can piece together your own assemblies sourcing a crank from supplier X and pistons from supplier Y, but by the time you are done with ordering, shipping and deadlines, you are money ahead sourcing a complete rotating assembly from a single source. Virtually all of these kits contain forged cranks, forged rods and pistons plus complimentary rings, bearings and pins. Eagle has a large number of rotating assemblies for sale that cover a wide range of displacements and compression ratios. Its kits for standard LS engines feature 4340 forged cranks in 3.622?, 4.000?, 4.100? and 4.125? strokes, which depending on the block and bore size can net engine sizes from 347 cid to 434 cid. They all use 6.125?-long forged H-beam connecting rods with either Mahle or Arias forged pistons in various compression ratios. They also offer 4.250?-stroke rotating assemblies with 6.460?-long rods for GM LSX tall-deck blocks for up to 454 cid, and 4.250?-stroke cranks with 6.560?-long rods for World Products Warhawk tall deck blocks.

Lunati offers engine assemblies for LS1, LS2 and LS6 applications in a variety of bore and stroke combinations. All of its assemblies feature Lunati Pro Series non-twist forged cranks and Wiseco Forged and CNC-profiled pistons. They are available in the following displacements: 347 cid, 383 cid, 395 cid, 408 cid and with a 4.125? bore block − 427 cid. You also have a choice of the more expensive I-beam or less expensive H-beam rods, all 6.125? long.

Scat breaks its LS rotating assemblies down into two groups: street and strip and competition. They also offer these kits balanced or unbalanced, you decide. They offer three different stroke 4340 crankshafts at 4.000?, 4.125? and 4.250? strokes. Two different rod styles, forged 4340 H-beam and forged 4340 Pro Comp I-beam 6.125?-long are included depending on the kit. Forged pistons, rings, pins and bearings are also included. Displacements from 365 cid to 461 cid are available.

K1 is part of the Wiseco/JE/SRP piston group and has collaborated with Wiseco to build a really comprehensive catalog of LS rotating assemblies, plus they have the advantage of designing components as a unit, which reduces mass and results in assemblies that are easier to balance. The K1 cranks are forged out of 4340 steel, core-hardened and nitrided for journal surface hardness. K1 connecting rods are offered in two styles – forged 4340 and billet 4340. They are weight-matched within a gram and come with pin bushings for improved friction reduction. The pistons are all forged lightweight Wisecos with metric ring packages. K1 offers kits from stock stroke 3.622? as well as 4.000?, 4.125? and 4.250? stroke cranks. Rod lengths vary from 6.098? to 6.365? depending upon stroke and compression height. Displacements range from 347 cid to 471 cid.

Probe has divided its LS rotating assemblies into two categories – its Dominator series features lightweight forged I-beam connecting rods and its Pro-Street series features forged 4340 H-beam rods. Both series use forged SRS pistons in a wide variety of compression ratios with tool steel pins for the Dominator kits. The forged Probe rods come in 6.125? or 6.200?-lengths depending on the assembly. The forged 4340 steel cranks are available in 3.900?, 4.000? and 4.125? strokes. All kits are complete with rings, bearings and piston pins.

While these manufacturers are just a sampling of what’s available for LS stroker kits, it gives you an idea of just how many combinations are available so that you can build almost exactly what your customer wants or needs.

Going to really long strokes and huge displacements require the aftermarket blocks mentioned previously. The choices are GM’s iron LSX block, RHS’s LS Race Block and World Product’s LS Warhawk block. Let’s look at GM’s LSX engine first introduced by GM Performance Parts at the 2006 SEMA show. The LSX is an all-new cast-iron racing block based on the LS7 engine. It was designed with help from drag racing legend Warren Johnson. It offers displacements ranging from 364 cubic inches to 511 cubic inches (4.25? (108 mm) bore x 4.5? (114.3 mm) stroke) and is capable of withstanding 2,500 hp. This block incorporates two extra rows of head-bolt holes per bank for increased clamping capacity. The six-bolt steel main caps are the same ones used on the LS7 engine. If you can handle the weight penalty of an iron block over aluminum, the LSX is a good value.

Racing Head Service’s (RHS) LS Race Block is cast out of A357-T6 aluminum with press-in spun cast iron liners that are available in two bore sizes 4.125? and 4.165?. The raised cam position can handle up to a 60mm cam core and a relocated oil galley provides room for a 4.600? stroke crankshaft and directs oil to the main bearings first. Two deck heights are available: standard (9.240?) and a tall version at 9.750?. The RHS block is chocked full of other features like multiple engine mount options, dry sump connections and access to the two additional head bolt hold downs per cylinder.

As you can see there is virtually limitless ways to build a large displacement LS engine. And when you consider the plethora of aftermarket cylinder heads, intake systems, and power adders, it makes sense that the LS engine is going to represent a big piece of any performance shop’s business. We hope this brief look into LS stroker engines has whetted your appetite to build a few large LS derivatives. Hot rodders are stuffing these engines into anything they can get their hands on because the combination of lightweight and big power is too hard to resist. With very little effort you can get old fashion big-block power in a tight little package.