Gen III PCMs are powerful control modules but they are of little use without tuning software to change engine (and transmission) operating parameters. Before getting too far into a discussion of electric fans and PCM calibrations, it is important to first consider air conditioning control.

Air Conditioning Considerations
Prior to buying a custom wire harness or doing PCM calibration work, determine if the vehicle will have air conditioning, if electric fan(s) are required when the A/C compressor is on, and if the PCM will be used to control the electric fan(s).

Will the Vehicle Have Air Conditioning?

If the vehicle is fitted with air conditioning, the engine experiences additional load when the A/C compressor clutch is engaged (A/C is on). For engine retrofits, many PCMs (excluding 2003- newer) have an A/C on input that allows the PCM to adjust for the additional engine load, avoiding low-RPM stumble. Wired properly, and if using an LS1 Camaro, Firebird, or Corvette PCM calibration, the electric fan(s) turn on when the A/C is on to pull air through the A/C condenser.

Will the Electric Fan(s) be Required when the A/C Compressor is On?

When the A/C system is turned on, low-pressure refrigerant gases are drawn into the A/C compressor and transferred to the A/C condenser (located in front of the engine radiator) as high-pressure gas. The A/C condenser is essentially a radiator that cools the high-pressure refrigerant gases into a liquid again, in order to cool the interior of the car. To cool the A/C condenser, air must pass through it. One method of cooling the condenser is to install a permanent mechanical fan in front of the engine (as on many GM trucks). A more common method of drawing air through the condenser (and engine radiator) is through electric fan(s).

Will the PCM be Required to Controlthe Electric Fan(s)?

Many owners operate electric fan(s) independently of the PCM by triggering a relay through either the A/C compressor clutch circuit or through a trinary pressure switch. One drawback to these methods when using Gen III PCMs is that unwanted DTCs set as the PCM detects the fan(s) have turned on during conditions that the PCM has determined the fan(s) should be off. One solution is to simply disable these DTCs, which also disables the intended function of the DTC processing. A better solution is to use the PCM’s A/C control functions to gain improved A/C system control and A/C system diagnostics. (See Chapter 11 for more about A/C control.) 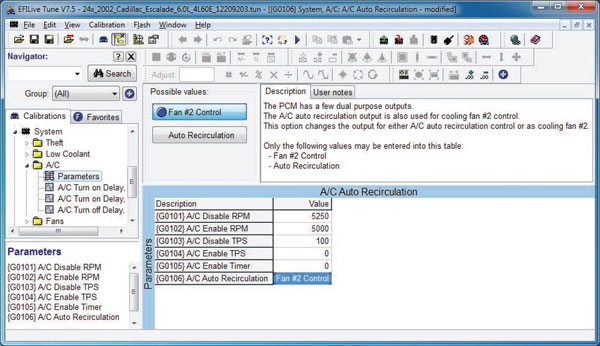 Many GM trucks equipped with a Gen III PCM use a mechanical fan. They use the typical high-speed-fan control output (red PCM connector, pin 33) as A/C automatic recirculation. When using a PCM with truck calibration, change calibration {G0106} from Auto Recirculation to Fan #2 Control. 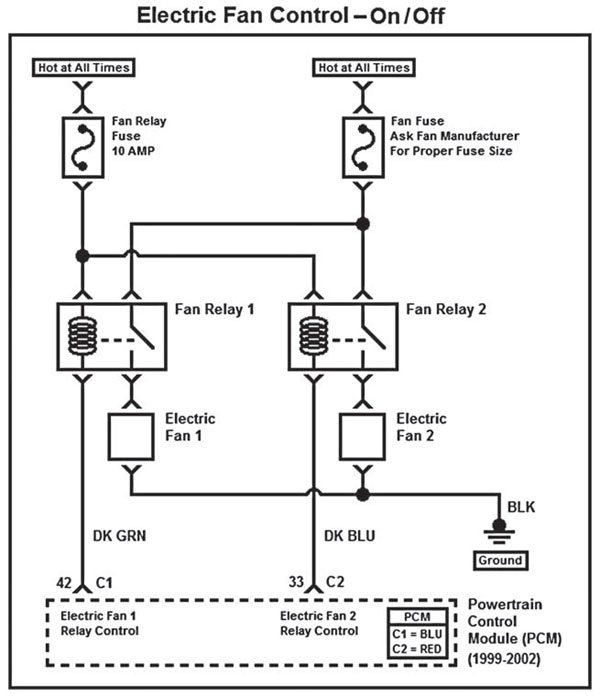 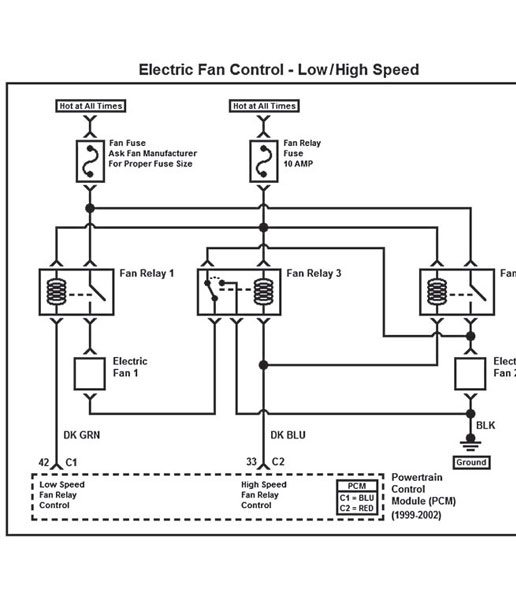 Because the Camaro and Firebird were only available with a cable throttle body, PCMs loaded with the LS1 Camaro or Firebird calibration are the best choice for cable throttle engine retrofits where the PCM controls both A/C and electric fans.

GM trucks were fitted with a mechanical fan until 2005 so those PCM calibrations do not have provision for electric fan control with A/C on. In 2005, when electric fans were introduced in GM trucks, both manual and automatic A/C controls communicated with the PCM using the Class 2 data stream, a signal not available in early retrofit vehicles. The best solution for retrofits using the PCM for electric fan control is a 1999–2002 Camaro, Firebird, or Corvette calibration.

All Gen III PCMs are capable of controlling one or two electric fans.

Production vehicles operate two fans with low- and high-speed capability using three relays to switch between series and parallel operation. However, since the PCM is only applying a ground to each fan relay signal circuit, two fans can be controlled through two relays for on/ off operation. In this way the electric fans are always wired in parallel so that each fan receives system voltage.

PCMs with a truck calibration, depending on the year, require the fan outputs to be turned on and on/ off temperatures to be set.

Production vehicles operate two fans with low- and high-speed capability by using three relays to switch between series and parallel operation. The third relay is responsible for switching from series (low-speed) to parallel (high-speed) operation.