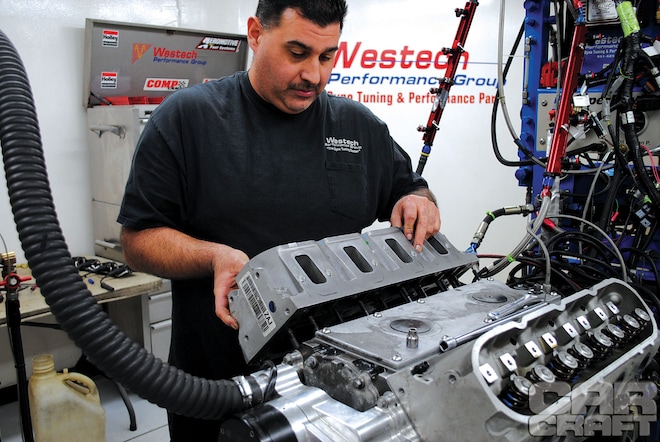 Chevrolet took one heck of a chance by replacing its much loved small-block with the modern LS1. The LS1 had big shoes to fill—after all, the original mouse motor was the darling of the racing and aftermarket industries. History has shown that not only is the LS1 equal to the small-block (including every muscle car–era version), but the modern mouse easily eclipsed the original. The LS engine family offered more power and torque and less weight, while simultaneously improving fuel mileage and reducing emissions. Time marched on, and Chevy upgraded the LS family to LS3 status. Offering increased displacement and even more power, the LS3/L92 variants represented the next evolutionary step in performance. In its infinite wisdom, Chevy saw fit to design the LS3/L92 LS heads as a direct bolt-on for the early cathedral-port motors, at least those with sufficient bore size. The LS3 motors featured a 4.065 bore, but their cylinder heads would fit the 4.0-inch bore LS2 and iron LQ 6.0L truck motors. With much speculation on the subject, the question we had with this upgrade was twofold: 1) How much power was the LS3 head upgrade worth over the stock cathedral port heads, and 2) How does the LS heads upgrade compare with a set of aftermarket heads? In short, we were looking to eliminate speculation with some facts.

LS Heads Test – The Dyno
Naturally, the answers came on the dyno, but not before deciding on a proper test mule. The all-aluminum, 6.0L LS2 qualified, but the most common (and affordable) option for swap motors is the iron 6.0L truck block (LQ4 or LQ9 are the most common, but newer Gen IV versions include LY6 and L76). Obviously, you are more apt to find a truck motor than an aluminum LS2. These 6.0L/LS3 hybrids have become very popular, and for good reason. The airflow data alone (see flow numbers, page 19) illustrates the potential benefits of performing an LS3 head upgrade to your 6.0L truck motor. Where the stock 6.0L heads (317 castings) flowed a respectable 244 cfm, the LS3 heads offered 318 cfm. The AFR 245 cathedral-port heads used in this test stepped things up even further, with peak flow numbers of 349 cfm—enough to support more than 700 hp!

With the bore size a concern, we selected a 6.0L truck block, but instead of relying on the stock internals, we upgraded to a stroker assembly from Procomp Electronics and Probe Industries. The kit included a 4.0-inch forged steel crank combined with 6.20-inch 4340 forged steel connecting rods and 10cc dished pistons. The forged pistons from Probe Industries feature valve reliefs to allow the piston-to-valve clearance demanded by our 289LRR HR14 hydraulic roller cam from Comp Cams. Designed specifically for a rectangular-port head application (which likely did not favor either of the cathedral-port heads), the 289LRR grind featured 0.624 lift, a (wide) 239/255-degree duration split and a 114-degree LSA. The wide duration split was designed to help the relatively poor-flowing exhaust on the LS3 heads. We spoke to Tony Mamo at AFR about the cam selection. “The 245 head has a good exhaust port, so you don’t need so much exhaust duration. A tighter exhaust lobe would prevent over scavenging the combustion chamber and make more power,” Mamo says. “If you are going to change the cam and the heads at the same time, I’d go with a 239/243, instead.” The cam was combined with a set of standard-travel lifters and hardened pushrods from Comp Cams. The 0.030-over 408-stroker short-block also featured a new timing chain and oil pump from Speed Pro, a set of ARP head studs and MLS head gaskets from Fel Pro, and a Moroso oil pan and windage tray.

After running the 317, 0821, and AFR 245 on the flow bench, we took the opportunity to measure the combustion chambers. The chamber sizes varied from a low of 64 cc for the cathedral-port AFR 245s, 70 cc for the stock LS3 heads, and a high of 73 cc for the 317 heads. Obviously, the difference in chamber volume would alter the static compression ratio by as much as one full point between the AFR 245s and the stock 317s. The result of a point of compression adds 1.5 to 2.0 percent, or about 10 hp, automatically to the AFR 245 heads. To make this a fair fight, we gave the two factory heads the same percentage and compared the data. As you will see, the aftermarket heads and factory square port LS heads outperformed the cathedral ports with a comfortable cushion, even with the handicap.

With our test motor at the ready, we installed the 317 heads, but not before upgrading the stock valvesprings with a set of 26918s from Comp Cams. We performed the same upgrade on the LS3 head. The stock springs on either heads would be insufficient for the lift and designed engine speed of this test. The heads were run with a Fast LSXR intake and 102mm throttle-body (we had both the cathedral and rec-port versions on hand). Also present was a Meziere electric water pump, QTP 13⁄4-inch long-tube headers and a FAST XFI/XIM management system. FAST also supplied the 75-pound injectors and aluminum fuel rail employed during the test. The heads were all run with stock 1.7:1 rockers, offset in the case of the LS3 intakes.

First up were the 6.0L truck heads (317s), which eventually produced 543 hp at 6,300 rpm and 526 lb-ft of torque at 4,800 rpm. These LS combinations never fail to impress, even when saddled with stock cylinder heads. Torque production from the stock-headed 408 stroker exceeded 500 lb-ft from 4,300 rpm to 5,400 rpm. Given the minimal flow and largest combustion chamber (lowest compression), it was not surprising that the 317 heads offered the least amount of peak power. Next up was the LS3 upgrade. It should be noted that while LS3 heads are common and available, the head swap also requires offset intake rockers (exhaust rockers are shared with LS1), an intake manifold, and possibly a throttle-body, depending on the application. This makes an LS3 head upgrade somewhat more expensive than a simple head swap might appear. Nevertheless, the additional flow offered by LS3 heads translated directly into power, as the LS3 head swap increased the peak power numbers to 581 hp and 543 lb-ft of torque, an increase of 38 hp and 17 lb-ft. Both peak and average torque production were up as the LS3-headed combination exceeded 500 lb-ft from 4,100 rpm to 6,100. Despite additional flow and smaller chambers, the big, rec-port LS3 combo lagged behind the smaller (cathedral-port) 317s up to 4,000 rpm.

Given the flow numbers and chamber volume, we assumed the AFR 245s would combine the low-speed torque of the 317s with the top-end power of the LS3 heads, but we got even more than we expected. With AFR 245s, our 408 produced 604 hp at 6,500 rpm and 556 lb-ft of torque at 5,400 rpm. Note that both peak numbers occurred higher in the rev range than with either of the two stock heads, but the seemingly high-rpm power was combined with plenty of torque. Not only did the AFRs produce the highest peak torque output (556 lb-ft), but (like the 317s) they easily exceeded the torque production of the LS3 heads below 4,000 rpm. With the exception of a merge at 4,200 rpm, the AFR 245s out-performed the LS3 heads through the entire rev range, with gains of 20 to 25 hp at the top. Truth be told, both the cam timing (skewed for rec-pot heads) and the bore size (AFR 245s were designed for 4.125-bore motors) likely hindered the 245s on this application. The airflow numbers suggest the 245 heads will support more than 700 hp, and we have seen big-bore combinations that verify this fact. The question now is: Does it make more sense to perform an LS3 head upgrade or go with a set of aftermarket cathedral-port heads? The aftermarket-head approach is a lot more expensive, but this test illustrates that the LS3 head swap isn’t the only game in town. 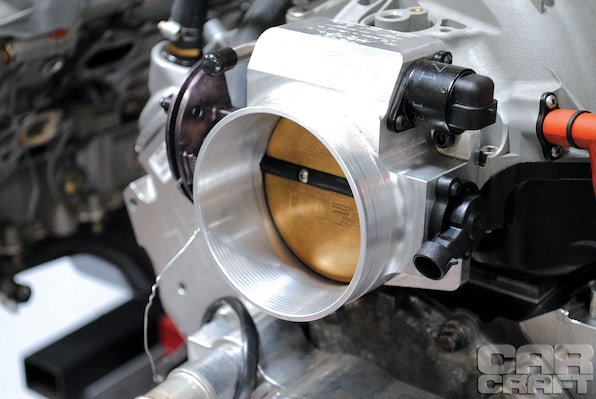 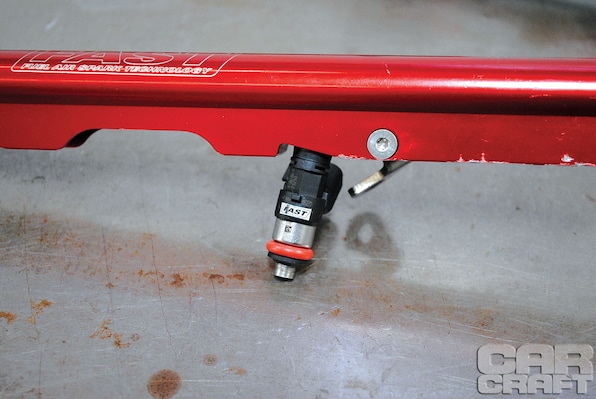